It had been the same location but the circumstances were completely different as compared with our first visit in October: the sun was shining and the wind gently touched the green wheat stalks.

Our group (Kim Gallop, Eddeanna Hixson Moore, Raymond Otto McKee, John Meurs and his wife Carien and me) were to meet with Fritz-Otto Kreipe and Horst Swischenko, who as kids had witnessed the crash of the American bomber.

Eddeanna, Raymond, John Meurs and his wife had come to visit Germany, to be more precise Oerie. They had arrived that week-end to unveil on Sunday a monument in the Oerie cemetery. This monument had been presented by the McKee family, of which some members had been in Oerie the previous year to visit this particular spot. (Visit of the McKees)

Sixty-five years earlier the fathers of Raymond and Eddeana had lost their lives in Oerie. Raymond O. McKee and Charles E. Hixson were two of the nine airmen who died in the crash of „Ark Angel“ and these children had made the long trip from the U.S.A. to attend the ceremony in the Oerie cemetery.

But also the presence of John and his wife was something special as he had researched the details of this almost forgotten crash in WW II, paving the way for this gathering on this special location in this small village called Oerie.

And now they were all here. Eddeanna, called Eddi by her mother after her father, came into this world on December 25, 1944, almost a month after her father’s demise. She and Raymond McKee, who was born in April 1945, never knew their fathers.

For both of them it was a very special moment to see the spot where their dads had lost their lives. The meeting of the guests from the U.S.A and Switzerland with the two eyewitnesses was very friendly and warm. Horst Swischenko had placed a white wooden cross on the exact spot in the field of wheat where the burnt out wreck of the bomber then had lain. 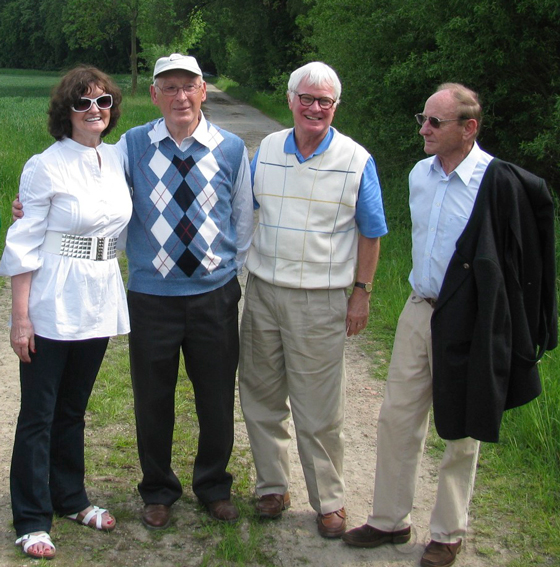 When I was here in autumn together with the McKees and heard the stories of the then nine and eleven year old boys, I really had the feeling that this is a special spot of land.

They gave detailed descriptions of the crash site and where some of the bodies had been found. And now a white cross had appeared in the field: like a cross in a cemetery indicates a grave. Also for me it was a poignant sight: what before had looked like an ordinary field had now become a place not only of violent death but also a place of commemoration.

Horst Swischenko and Fritz-Otto Kreipe talked about the crash they witnessed in 1944. While we listened attentively to what they had to say, Eddeana discreetly separated herself from our little group and went straight through the green wheat stalks toward the white cross. There she spent several minutes on the spot where her father lost his life. It was a poignant scene. Again I realized that each of the fifty million victims of WW II carries a story worth being told, stories that honor and remember those who died, and hopefully to serve as a warning to the present generation. 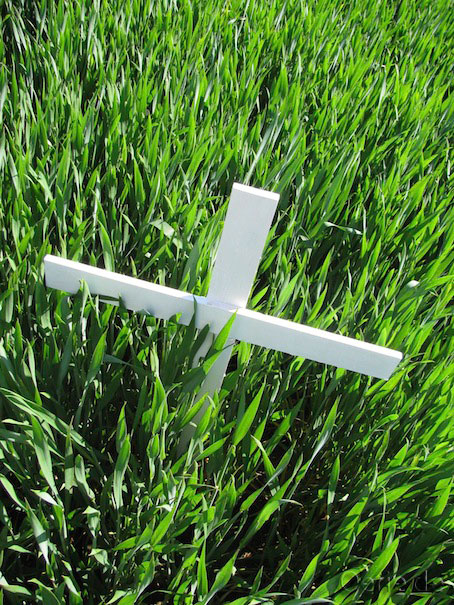