Norwood is a very small rural town on the Pee Dee River in NC, and the Bennett family had several enterprises: farmland, a livery stable, and a ferry to cross the river.  Neville’s grandfather had been a legislator in the NC General Assembly and was appointed by the NC Governor as the 1st Mayor of Norwood when the town was incorporated in 1881.  His father managed the farm and businesses. His mother, LillianMenefee, had come to Norwood to open a hat shop, making hats for ladies and traveling to New York every year to discover the latest fashions.  When she married Mr. Bennett she turned from making hats to family life.

In boyhood Neville was handsome, smart, and a natural leader.  He was a good athlete and played on football, basketball, and other teams at his school.  Never without a girlfriend, he made friends wherever he went.  When the US entered WWII, he was very eager to join the military and fight.  But his parents insisted that he temper his eagerness and go to college instead.  He enrolled at North Carolina State University in Raleigh, NC.  After a year in college he either persuaded his parents to change their minds, or his eagerness to enlist overwhelmed his obedience to them.  He enlisted and left for the military.

Neville served in Air Force ground forces and got his flight wings 2 years into his service. In December 1944 he was awarded the Oak Leaf Cluster for meritorious achievement in accomplishing air missions over Germany.  He flew 14 combat missions. During his service Neville wrote home frequently.  In late December 1944, the Bennett family received a telegram notifying them that Neville was Missing in Action. 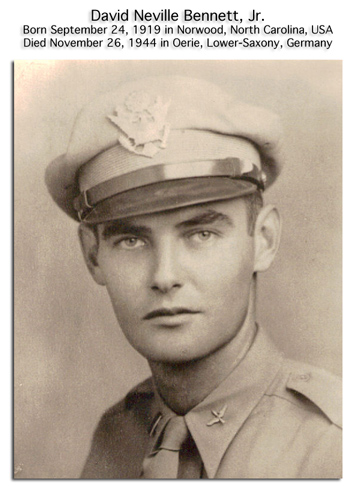